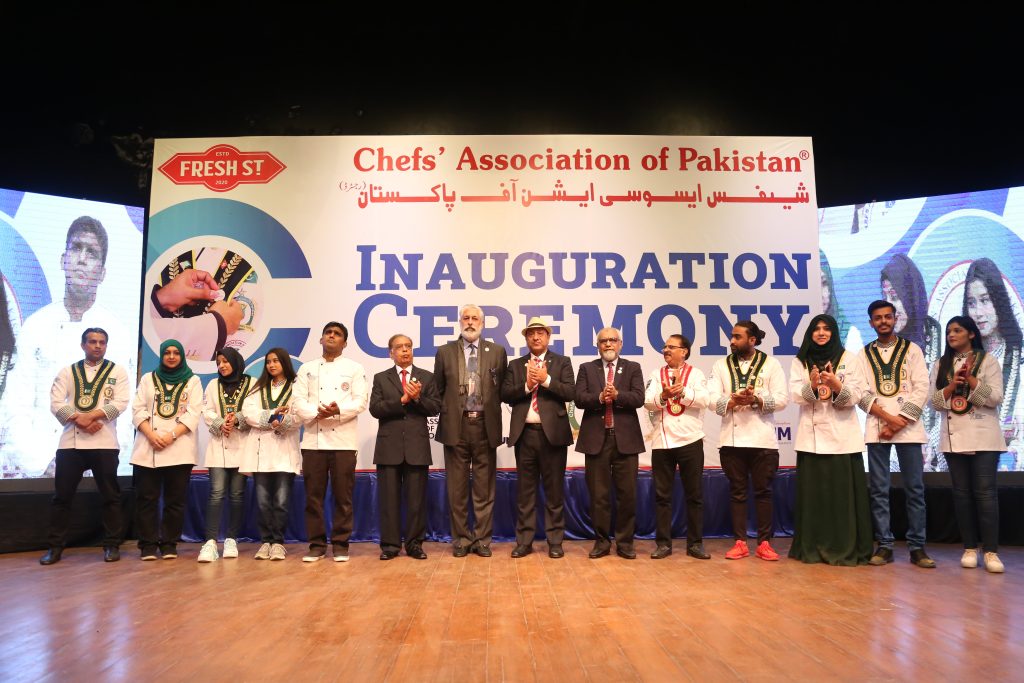 Chefs’ Association of Pakistan arranged the inauguration ceremony of its Sindh & Balochistan Region on December 4, 2021 at Arts Council Karachi where new members were also sworn in.

The Chefs’ Association of Pakistan, founded in 2006, is an apolitical and nonprofit organization. Being a proud member of Worldchefs, Paris – the global authority on food, CAP is the only national association of chefs here in Pakistan that is internationally recognized. It represents the finest chefs, restaurateurs, hoteliers, food & beverage companies, culinarians, educators, learners and other stakeholders of Pakistan’s hospitality, culinary, travel and tourism industries. Currently, the association is operating in 14 cities of Pakistan but, keeping in view the increasing number of skilled and qualified chefs in the country, CAP is gradually expanding its network of offices in other provinces and cities as well. To make its international presence even stronger, CAP is strengthening its National Culinary Team of Pakistan and Young Chefs Team by adding and selecting new players through rigorous competitions and trials. CAP is also promoting the culture of food competitions, gastronomy workshops, and culinary seminars/webinars and different other activities based on the concepts of healthy diet in Pakistan.

For the participants of the event, CAP presented an exclusive ‘Gastronomy Session’ conducted by National Culinary Team of Pakistan (NCTP) Captain Chef Muhammad Raees who traveled all the way from the United States of America (USA) to talk on the art of gastronomy. Culinary students and professionals from different colleges and organizations attended the session and benefitted from Chef Raees’s interactive and informative talk on the future of gastronomy.

In his address, Ahmed Shafiq talked about the future of hospitality industry in Pakistan and across the world. He briefed the participants about the role of Chefs’ Association Pakistan and invited all the chefs in the country to become a member of the association. He appreciated the chefs from the Sindh and Balochistan Region for attending the event in such a big number. He announced that CAP would develop a team of young chefs from Karachi as well for international culinary competitions.

Waqar Ilyas Khan talked about the useful benefits of Chefs’ Association of Pakistan for the newcomers from the Culinary Industry. He said that the association would guide its member chefs in the Corporate Sector as well and help them make their professional life even better.

Sabir Ahmed welcomed all the new members of CAP in Karachi and vowed that COTHM Karachi would always work on the frontline for the cause and interest of Chefs Association Pakistan.

At the end of the event memberships of Chefs’ Association of Pakistan were awarded to the professional and celebrity chefs working in Sindh & Balochistan Region.