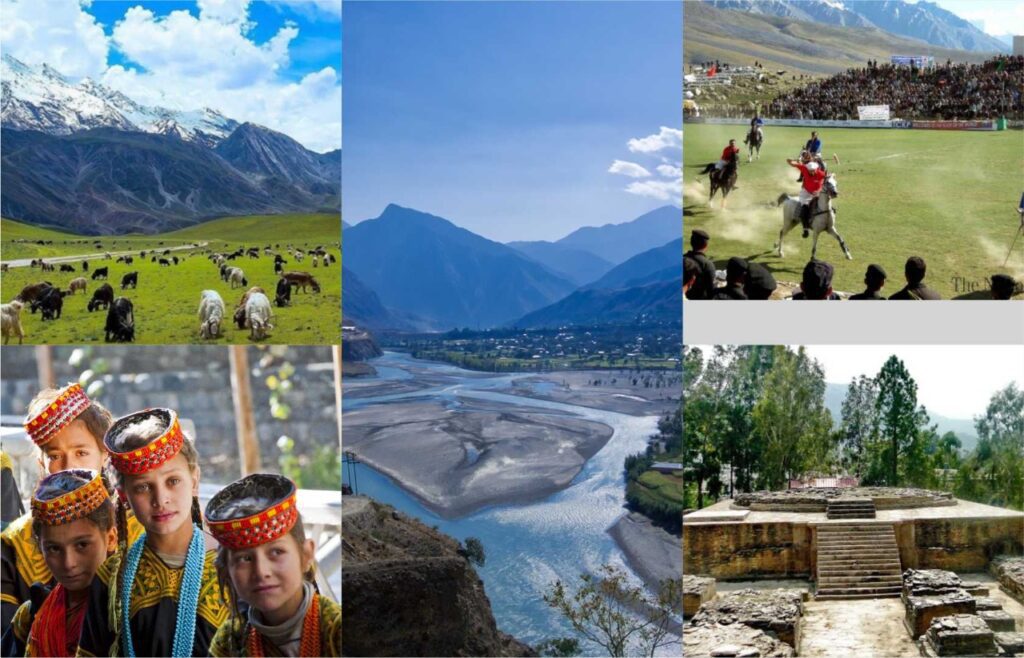 Chitral- A New Hub of Tourism in KP Province

Surrounded by some of the tallest mountains of Hindukush range, Chitral is Pakistan’s northern most districts and perhaps one of the most beautiful destinations for adventure, culture and ecotourism in the country. Area wise it is the largest district of Khyber Pakhtunkhwa Province. The valley is bounded on the north-west by the mountains of Hindukush and share border with Afghanistan.  On the north-east by the mountains of Karakoram and on the south by the Hindu Raj range. There are more than 40 peaks over 6,100m packed in the area of 14,850 square kilometres, altitudes in this rugged terrain range from 1,094m at Arandu to 7,726m at Tirichmir. The Chitral valley and its subsidiary valleys are drained by the Chitral River, which is known by different names along various stretches, and its tributaries. Originating in the Chiantar glacier, the river enters Afghanistan at Arandu.

Chitral town, the main city of the district, is linked by air and road with the rest of the country. PIA operates weekly two flights to Chitral from Islamabad but this flight is subject to good weather condition. The usual flight time is around 50 minutes. The main road link between Chitral and rest of the county was via Lowari Tunnel with a driving time of around 12 to 13 hours from Islamabad to Chitral in normal conditions. During summer one can also reach Chitral via Shandur Pass from Gilgit-Baltistan. This pass is closed in winter due to snowfall. There are number of other high passes which provide access on foot to Chitral from the areas of Upper Swat, Upper Dir and Gilgit-Baltistan.

Situated on the main crossroad to Central Asia, Chitral has a long and fascinating history. In fact, it is this strategic location that compelled invaders to capture it before any other area in the region. The recorded history of Chitral begins with the Tibetans invading Yasin Valley in the 8th Century AD, followed by the Chines in 750 AD and the Buddhists in 900 AD. Later, the Kalash also ruled Chitral for decades.

In the 14th Century, Chitral became a unified independent kingdom under the rule of Shah Nasir. In 1570, the Raise Dynasty was replaced by the Katoor Dynasty. The famous Mehtar of Chitral Aman-ul-Muluk ruled from 1857 to 1892. In 1895, the siege of Chitral Fort took place and lasted a month, after which Chitral remained an independent state under British rule. When Pakistan came into being, the state of Chitral was the first to declare accession to the new country. In the year 1969, Chitral was merged into the Malakand division of then NWFP as a settled district of Pakistan.

The people of Chitral have a great ethnic diversity. Some tribes existing in the area include Katoray, Mehtar, Quraysh, Khow etc. The biggest tribe in the district is Khow, their origins are from Aryan ancestry and some believe that they come from central Asia, Afghanistan and Kashmir. Chitral is also home to the famous aboriginal tribe of the Kalasha who are now confined to the three valleys of Bamburiat, Rambur and Barir.  Now the total population of Kalasha people is roughly around 4,000 individuals and they are considered one of the most endangered indigenous people in the world.

Chitral Valley is Pakistan’s one of the most beautiful places to visit. From snow covered mountains to fast flowing rivers to forests and alpine meadows, Chitral has everything for the tourist interested in nature and cultural exploration. The valley is famous for mountaineering, trekking, fishing, paragliding, river rafting, kayaking and hiking in addition to a number of beautiful tourist spots in the valleys of Kalasha, Garam Chashma, Golain, Madagalash, Laspur, Broghal and Tirichmir. Chitral is also one of northern Pakistan’s most historically and culturally rich districts. The three Kalash Valleys are located in the north-west of Chitral town and are inhabited by the Kalasha people, who have customs and language which are quite different from their neighbours, and historically have had a different religion. They claim legendary ancestry as descendants of Alexander the Great’s armies who were left behind after his campaigns in the area. The Kalasha have a unique culture that has attracted everyone from missionaries to anthropologists to tourists.

The best time to visit Chitral is from April to October, although months of June and July are bit hot at lower altitude areas.  There are around 30 hotels of different categories with more than 400 rooms in Chitral town. The second big cluster of hotels is in Bamburit (Kalash Valley) with 28 hotels.  Rambur has six small hotels and similarly Barir has around five small guest houses. PTDC operates a chain of motels in this area, having properties at Chitral town, Buni, Mastuj and Bamburit. These motels are located at good location and provide moderate standard tourist accommodation on reasonable rates.   Along the old forts at Mastuj, Ayun and Nagar, the owners have developed few nice guest houses which provide limited but good quality accommodation facilities to the domestic and foreign visitors.   Without any doubt Hotel Hindukush Heights is the most elegant and luxurious place to stay in Chitral which has distinction to host many international and national celebrities.

In the recent years, a significant growth has been observed in the domestic tourist arrival in Chitral district. Foreign tourism is now also growing significantly.  Most of the domestic tourists are groups of young people and family friends who visit this area during summer holidays especially during the Kalash Festival and Shandur Festival days. Social media has greatly contributed in the promotion of domestic tourism in Chitral but still there is lack of proper information about the tourist places and trekking routes available in different side valleys of Chitral. If efforts are made to promote tourism in Chitral through print and social media there is possibility that a good number of domestic as well foreign tourists can be attracted to visit unexplored valleys of Chitral district. But over and above, it is more important to promote responsible and eco-friendly sustainable tourism in Chitral valley because this area is very fragile in terms and natural and cultural heritage. It is my humble advice that the government of KPK should strictly regulate the development of tourism in Chitral to avoid mushroom growth of ill-planned hotel infrastructure which has damaged the landscape beauty in most of the other areas of the province in recent past. Moreover, there is urgent need to build the capacity of local people to provide quality tourism and hospitality services to the incoming visitors.