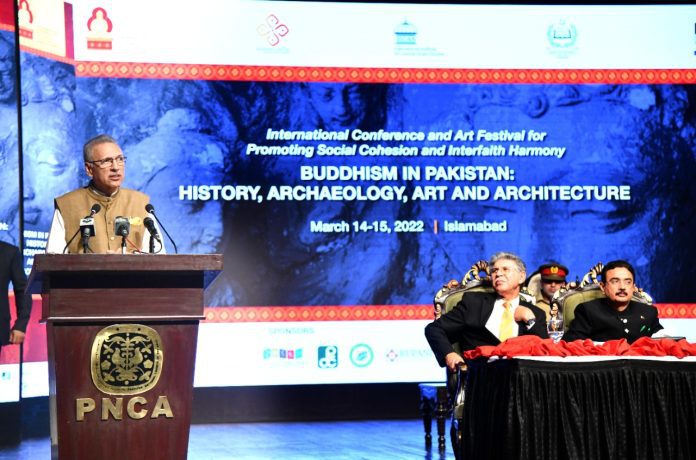 President Alvi Monday said that Pakistan was a home to the world’s ancient civilizations including Buddhism, and stressed upon making of further efforts to preserve and promote the religious tourism to bring different people of the world together.

Addressing an international conference on ‘Buddhism in Pakistan: history, archaeology, art and architecture,’ here at the Pakistan National Council of the Arts (PNCA), he said, Pakistan was rich with the Buddhist’s heritage and a large number of artifacts were found here than any part of the world.

The Buddhism spread from the Northern parts of Pakistan to Korea and Japan, he opined while tracing the various historic events.

He said recently, various delegations of vulnerable monks from Korea, Thailand and Sri Lanka had visited Buddhist sites in Pakistan. The exchange of such delegations helped in preservation of these historic sites, besides bringing people from different parts of the world closer.

The president Alvi said in Pakistan, the Indus valley civilization was rooted into Buddhism, besides the Gandhara and Mohenjo Daro were the other beautiful sites of the early civilization.

He observed that olden civilizations always thrived on the banks of rivers and water reservoirs.

Sharing his personal experiences of visiting Thailand and Tibet and other Buddhist rich cultural places, he said the preaching of Buddha was based upon search for self.

About 50 speakers from different countries of the world including Thailand, Sri Lanka, Germany, the US, Canada and Malaysia attended the conference, while 22 among them presented their research papers.

Ambassadors of Sri Lanka and Thailand along with a large number of representatives from the Buddhist-rich civilization countries were also present.

The president opined that this search was unending as human beings grappled with the worldly affairs. The human beings were a combination of contrasting desires, but the desire of doing good and to live with other human beings in harmony were the dominant in the human history.

The president regretted that the world was full of hegemonic attitude as there was struggle over ‘mine and thine’. He said Pakistan always talked and advocated for peace in the world. The president said tens of millions had died of wars in the world, and stressed that going back to the peaceful traditions was very important.

The president said the basic instincts revolving around human exploitation, love and hate were deeply rooted in the human fabric.

He said Buddha taught that in presence of worldly desires, there could not be peace and this message was reflected in the image of fasting Buddha. The Buddhism stressed upon curbing of desires in life to becoming familiar with other basic human emotions.

Vice Chancellor Quaid-e-Azam University Muhammad Ali, in his welcome address, highlighted the objectives of the international conference. He said the conference would help promote soft image of Pakistan and boost religious tourism.

Prince Mian Gul Adnan Aurangzeb, a resident of Swat, whose family has been looking after the preservation and promotion of Buddhist sites, briefed the participants about the history and different historical sites at Swat and other parts of Khyber Pakhtunkhwa province, forming ‘a golden triangle’ of Buddhist sites up to Taxila. He also enumerated the steps taken for the preservation of these sites.